Today I’m very lucky to be interviewing Kallypso Masters, author of the Rescue Me Saga series. And she’s about to launch a new series—Bluegrass Spirits.

Hi Kally, thank you for agreeing to this interview.

SR: Tell us a little about yourself and your background?

KM: Thanks for inviting me, Trish! I’ve been writing Romances since high school, but only started publishing in 2011 with MASTERS AT ARMS, NOBODY’S ANGEL, and NOBODY’S HERO, which begin the Rescue Me Saga. I have a degree in journalism but my first love has always been Romance writing. I’m living the dream!

SR: Can you tell us a little about this book you are working on now?
KM: My new series, Bluegrass Spirits, is one close to my heart. These books are set in Kentucky, where I was born and live, and also feature some meddling—I mean, matchmaking—spirits who have goals of their own to accomplish before they can leave the earthly plane behind. The first one’s set in a house familiar to me and my family, and actually has some ghosts of its own. It’s the house featured on the cover (a photo I took myself). JESSE’S HIDEOUT is what the heroine, Tillie Hamilton, named her B&B inn. She’s attracted the ire of her benefactor’s grandson, Greg Buchanan, who shows up ready to debunk her claims that his grandmother haunts her inn.

SR: Where did the idea come from?
KM: The story is set in my dad’s hometown and whenever we passed by the house on the cover, he’d always say, “Jesse James used to hide out there.” That stuck with me for 50 years! I started a story once before in the 1990s, but this is a new effort and so much better. In this one, even Jesse James makes appearances!

SR: What was the hardest thing about writing your latest book?
KM: Figuring out how far I can go and still be Contemporary Romance, the genre I’m marketing this in. I do have sex in it (I don’t believe a Romance should EVER be closed door!) but it’s late in the story and not anything like the level of the sex scenes in the Rescue Me Saga series, ROAR, or Western Dreams. And, when the hero in this book showed definite dominant tendencies, at first, I thought, “No! This isn’t a BDSM Romance! I want to attract vanilla readers to try my books!” Then I realized you don’t tell a Dom he can’t be a Dom. So I loosened the reins and found myself having a lot of fun showing another Dom who is bedroom only and not into bondage, whips, chains, dungeons—but is still a Dom all the way. Your followers will spot the signs (some readers have seen it as early as a Chapter One excerpt I shared in my newsletter—and others noticed it a bit later). Hopefully, I’ll keep my long-time fans happy being in on this secret—and might even get some who think they’d never read a BDSM novel to venture over to my other series and ROAR.

SR: Do you work to an outline or plot or do you prefer just see where an idea takes you?
KM: I couldn’t plot my way out of a paper bag, so I am a pantser all the way (writing by the seat of my pants, basically). I also don’t write linearly. In book two of this series—KATE’S SECRET—I wrote about 38,000 words somewhat linearly, then I skipped to the Epilogue. And now I’m working on the last regular chapter. I’m still going to have to add about 60,000 more words to the middle of the book, but until I know what they are, I’m just dancing around to whatever I’m inspired to write.

SR: How do you think you’ve evolved creatively?
KM: Wow—with every book, I’ve grown as a writer. It’s inevitable. Last year’s release, ROAR, had me going where no Romance author I know of has gone, showing what happens when the love of your life is left in a persistent vegetative state for years. Kristoffer remained true to his wife, but also needed to keep from burying himself away, too. The feedback I received from readers who have been in his shoes has been phenomenal. I’ve always enjoyed writing deeply emotional stories that connect with readers and even help some of them to work through similar situations. God forbid any of us has to face his dilemma, but I was able to find a way to give him a happily ever after that didn’t include the obvious solution. While it’s been kind of a sleeper as far as my Rescue Me Saga, I think more readers will pick it up when I link it to a trilogy I want to write about three familiar characters from the Saga—Mistress Grant, Gunnar Larson, and Patrick Gallagher. They’re featured in ROAR as secondary characters, but eventually will get their Romantic Suspense trilogy.
I’ve also learned ways to improve my craft over the years from my editorial team. As soon as I master one thing, they start finding other things. LOL But I’ve never been one to write to a formula or tell the same story over and over. (Anyone who has read the Rescue Me Saga knows that I don’t even stick to one subgenre within a series! I go where the characters take me and since those characters are linked as a family-by-choice, I chose to put them in the same series. But each book is so different—and kept me from getting bored.) I’ll continue writing in that saga forever, but needed a little break, too.
I am flexing my writing muscles now trying a new subgenre—Contemporary Romance. Diversifying is a must in today’s tight market, and I’m hoping that readers will enjoy the differences as much as I’ve enjoyed writing in the new series.

SR: What’s the naughtiest thing you have done in school?
KM: At 53, I can barely remember being in school! Lol Oh, wait! I remember in sixth grade, I used to sit in the front and Sr. Marita saw me roll my eyes when the boys in the back would cut up. So, thinking I might be a good influence on them, she moved me back there with them. When she caught me doing spitballs with chewed-up paper, I was called into the hall and she said she was SO disappointed in me. LOL I think I straightened up after that to being a good girl again.

SR: If you could have any superpower, what would it be?
KM: Astral projection. I played with this in NOBODY’S DREAM with my spiritual Cassie doing this, but I think it would be incredibly cool to be able to project my soul anywhere in Heaven and Earth—to have conversations again with loved ones who have passed, and to see places I can’t necessarily get to myself due to various restrictions.

SR: Tell us something nobody knows about you.
KM: I’m an open book and I think anyone who has followed me for a while or attended Facebook parties I’ve been at will know this, but I met my husband of almost 34 years by answering his Lifemates & Situations ad in The Mother Earth News back in late 1981. (I tease him that he was looking for a lifemate and I, a situation.) We corresponded for six months before we met and, being a writer, it was the best way to get acquainted with someone. I was hardened to romance and love (even at 23), but he won me over and we moved in together for 11 months before we married in 1983. My marriage taught me that happily ever after takes maintenance, and that’s a recurring theme in my Rescue Me Saga.

SR: If Hollywood made a movie about your life, whom would you like to see play the lead role as you?
KM: Kathy Bates! I never would have come up with that on my own, but I asked readers and the first two responses were Kathy Bates. One, a friend who knows me personally, said: “I feel like she could capture your strength and sense of humor.” And another, “The sass!” Well, I loved her in Fried Green Tomatoes (Towanda!!!!) and even in Misery as an author’s number one (but totally crazy and sadistic) fan! I think she’d be awesome playing Kally Masters in a movie! LOL

Thank you so much for being on Sunshine Reads. I’m looking forward to your books.

Tillie Hamilton is the latest person to use her 180-year-old house in rural Kentucky as a hideout—taking her cue from the infamous outlaw Jesse James who frequented the place. The house she converted into a bed and breakfast is the only sanctuary she’s ever known, ever since the old woman she inherited it from rescued her from neglect as a small child.

However, sparks fly when her benefactor’s handsome grandson, Greg Buchanan, accuses Tillie of exploiting his grandmother’s memory for her own ends by claiming Gram haunts the inn.

Greg vows to debunk the charlatan’s claims but quickly discovers the charming Tillie is not at all what he expected. Embarrassed to admit he’s another of the conspiracy theorists she scoffs at, he hides his other reason for showing up at her B&B. But while reading his grandmother’s private journals, he learned Jesse James returned to this house in the 1930s, half a century after historians believed he’d been shot dead.

And yet his attraction to Tillie keeps him torn between setting history right and forging a new history of his own in Tillie’s arms. Tensions mount, leaving his grandmother’s spirit to think her dying wish—something she’s wanted since Tillie and Greg were children—may never come true.

Can Gram and Jesse make the two lonely overachievers see they belong in each other’s arms before time runs out for them in this lifetime?

I’ll also be having an online book signing on my Web site at http://kallypsomasters.com/jesses-hideout-paperback-virtual-signing for those wanting signed, personalized paperback copies sent directly to their homes. 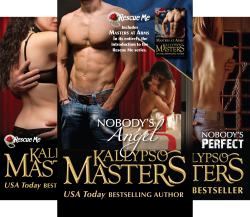 We Rise by Lifting Others

YOU ARE GOOD ENOUGH.

It's the three day party in February you do NOT want to miss.

Love on the Edge

Spreading the love and sunshine to authors and readers where I can!

Reading As My Therapy

Welcome to my Life. As I turn Everyday into a Holiday -

Brought To His Knees

Brought To His Knees, tough guys laid low by love

What Doesn't Kill You Makes You Stranger